The post is shared with wrong captions. The picture is of a millionaire Sheron Sukhedo, who was gunned down in Trinidad. Please read more about it in verification section of this article.

The post is shared with wrong captions. The picture is of a millionaire Sheron Sukhedo, who was gunned down in Trinidad. Please read more about it in verification section of this article.

Verification: The man in coffin is not Kuwait’s richest man Nassi Al- Kharki

The man in the coffin was actually a millionaire real estate mogul from Trinidad and Tobago and not from Kuwait. The name of the man was Sheron Sukhedo and not Nasser Al-Kharafi. Read the news published in the links shared below:

Dressed in white along with his famous gold jewellery adorning his fingers, hands and neck, he was laid in a $50,000 casket which had words like ‘Sheron’s Auto’ and ‘World Boss’ inscribed in it
33-year-old Sheron Sukhdeo, a Millionaire Car dealer and real estate agent from Trinidad and Tobago, who was murdered on Monday in cold blood, was laid to rest with accessories ‘he might be needing in the afterlife: Read more 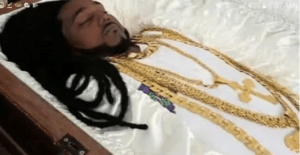 Bling funeral: Millionaire real estate mogul, 33, wears $100,000 of jewellery as he lies in a gold casket after being gunned down in Trinidad: Read more

The name used in fake claim is Nassi Al-Kharki. It is possible that the person behind this fake claim is trying to refer Nasser Al- Kharafi.

Chairman of MAK Group, a pillar of the Kuwaiti economy, with interests in banking, manufacturing, construction, and food. Has real estate development projects in Albania and Bulgaria, as well as Africa. Plans to sell stake in telecom company Zain on hold. British press reported this past fall on Al-Kharafi’s plans to build a $150 million neoclassical mansion in Hampstead Heath, to dismay of local residents. Spokesman says: “There are no plans for it to take place.” Al-Kharafi’s brother is speaker of the National Assembly. Enjoys gardening in spare time.

On 17 April 2011, Al-Kharafi died from a cardiac arrest in a Cairo, Egypt, hotel room. He was mourned by relatives and close friends, Kuwaiti MPs, politicians and businessmen and international figures. After his death M. A. Kharafi & Sons was passed on to his three surviving brothers Fawzi, Jessaim and Muhannad.

Kuwaiti billionaire chairman of Kharafi Group dies
Nasser Al Kharafi, prominent Kuwaiti businessman and one of the world’s richest men, died last night in Cairo according to the media reports.
The billionaire Kharafi Group chairman was regarded as a pillar of the Kuwaiti economy, with shareholdings in key businesses including the National Bank of Kuwait and telecoms company Zain.

In March, the Mr Al Kharafi was named by Forbes as the 77th richest man in the world, with the family fortune estimated at $10.4 billion.

Who is the richest man of Kuwait at present i.e in the year 2019?

According to Forbes, Kutayba Alghanim is the richest man in Kuwait 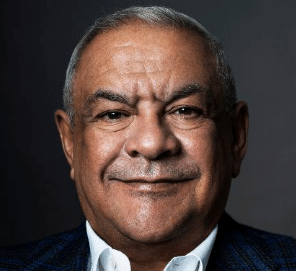 Kutayba Alghanim is the chairman of Alghanim Industries, which his late father Yusuf founded in 1932. His son Omar, who has a Harvard MBA, is CEO.
Alghanim sells GM and Ford cars in Kuwait, owns a consumer electronics retailer and Wendys restaurants in the Middle East, among other businesses.
Kutayba and his brother Bassam have fought over the division of assets they inherited and have turned to a Swiss arbitration court to settle.