This post claiming that St.Pope John Paul II body is found incorruptible, is not true. Please read more about it in this article.

This post claiming that St.Pope John Paul II body is found incorruptible, is not true. Please read more about it in this article.

“Pope John Paul – II, Died on 2005, April 2nd, After so, many years they opened his graveyard they saw that his body was not spoilt, & hosted hair also wasn’t spoilt it was as it is. So, I request to pl. share this video & message to all your friends & dear once.

Verification: This is wax statue of St. John Paul II  made in honor in life size with a cross on his chest that carries a relic of the late pontiff

This is not the real body of St. Pope John Paul. The post is being shared on various platforms claiming that body of St. Pope, after so many years of his death is still incorruptible. In fact this is a wax Statute of Pope John Paul II. St. John Paul II wax statue was made in his honor in life-size with a cross on his chest that carries a  relic of the late pontiff. The statue has toured several dioceses in Mexico for several years and the original video, which has more than 1.7 million views on YouTube, corresponds to the year 2011 and was recorded when the image arrived at a Mexican school.The original video is called Relics of Pope John Paul II and is observed when the statue enters the school. There the parishioners sang and took pictures from their cell phones. Read More 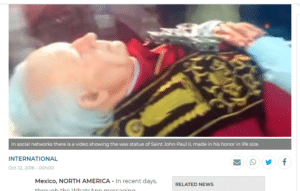 Worshipers applauded, cried and prayed as they walked past a glass case containing a wax figure of Pope John Paul II wearing a papal robe. The relics on display include a piece of skin belonging to John Paul II inside a reliquary, the papal robe he used during his first visit to Mexico and a collection of commemorative coins. The faithful crossed themselves as they walked past a picture of John Paul II, and some even brought framed pictures of him to be blessed by the local clergy. The canonization of John Paul II is drawing special attention in Latin America, reviving both warm memories of the his frequent visits to the region and controversies over sex-abuse scandals.

ARRIVAL OF THE RELICS OF BLESSED JOHN PAUL II TO THE BASILICA OF GPE.

August 25, 2011.- The transfer of the capsule-reliquary containing the blood of Blessed John Paul II, as well as the wax effigy of the Polish pontiff, began from the Apostolic Nunciature in Mexico, south of the city; Then, after crossing the entire metropolis of the capital, he arrived at the Sanctuary of Guadalupe, in Tepeyac, where there were already faithful waiting for his arrival. The glass coffin and the effigy of wax containing the capsule-reliquary were received by the Cabildo de Guadalupe and taken to the feet of the Virgen Morena, once there, the monumental organ of the Basilica began the notes of a solemn and glorious Jubilee song and the Eucharistic Celebration of thanksgiving began for the opportunity of the Mexican people to be the first in the world to receive a pilgrim relic of Pope Wojtyla. 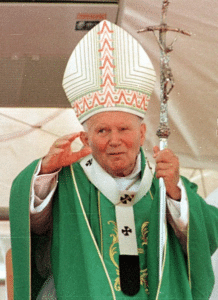