This is a false news that MJC, IQSA withdraws Mcdonalds, KFC, Dominos, Pizza hut certification. More info at the verification section of this article.

This is a false news that MJC, IQSA withdraws Mcdonalds, KFC, Dominos, Pizza hut certification. MJC had denounced this rumour around September 2016. Please find more details at the verification section of this article.

Important News-
Muslim Judicial Council (MJC) and IQSA has Withdrawn certification from McDonald’s, KFC, Dominos & PIZZA hut. Acccording to the kitchen office in Florida, United States, study into the McDonald’s ingredients has shown positive evidence of PORK materials the which is called “LM10” are used in the McDonald’s mayo.

South African McDonald’s Officials have confirmed that all of sauce based ingredients are imported from the US. (Muslim) Consumers are advised to abstain from McDonald’s. Muslim Judicial Council (MJC) and IQSA HAS ALSO Withdrawn certification countrywide. It’s your duty to inform others ….

Do not ignore this Message as u will commit sin for not passing on to people. Those eating it are eating “haraam FOOD”. So pls do inform Others

According to the study of the kitchen staff in Florida, America, McDonald’s ingredients have demonstrated positive proof of pork containing material that is called “LM10” which is used in mayonnaise McDonald.

The official McDonald southern Africa have ensured that all the raw materials are imported from America sauce. Muslim customers are encouraged not to consume McDonald.

Muslim Judicial Council (MJC) and also has an interesting IQSA certification across the country. It is now your duty to tell others ….

Do not ignore this message, because you will be a sin to not participate menyebarkankannya to others. Those who ate it means eating unclean food. So please announce unto other reply. 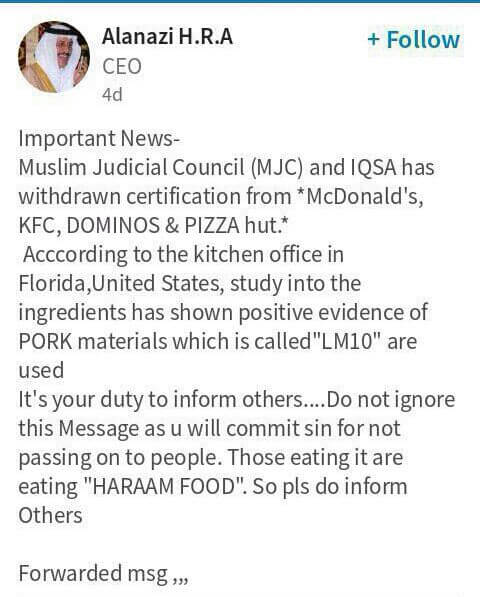 Its an hoax which MJC had denounced around September 2016. Please find more details at the link below.