This post is circulating on social media with wrong claims that this insect causes tiny holes In hands if touched. Please find more details in this article.

This post is circulating on social media with wrong claims that this insect causes tiny holes In hands if touched. Please find more details in this article.

“If you ever see this insect, please don’t try to kill it with your bare hands or touch it, this insect spreads virus to the place of bodily contact and circulates the entire human system in minutes, it was first sighted in India.” 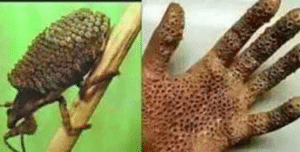 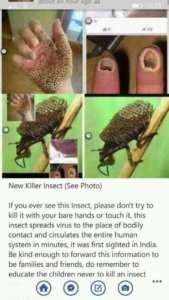 Verification:The holes in hand are not due to the insect

This post showing holes on hand due to killing insect bare hand is no true. This is an example of Clickbait where sensational headlines are used to attract click-throughs and to encourage forwarding of the material online social networks. You must have seen many such headings in youtube. But when you open, you will see something that is not related to the headline. Such headings are misleading. Its only to increase views and to earn money. This heading and image is also used in the same way, though it’s not true.

How did the holes in hand appeared?

Lets see how the scary holes are created on hand in the following video:

Isn’t it shocking to see this? May be you can try it for Halloween.

Now check this other image of Finger Holes: This is photoshopped. This image is being created like Cyclostomes. The suctorial mouth is ventral and round (hence, Cyclostomata). Buccal cavity has a muscular tongue bearing epidermal teeth by which they rasp the flesh of fishes. They are the only living vertebrates without jaws. They have 6-14 pairs of internal gills in different species. Gill-chambers are round pouches. The skin is soft and devoid of scales, paired appendages are absent, though median fins are present and supported by cartilaginous fin rays.Read More 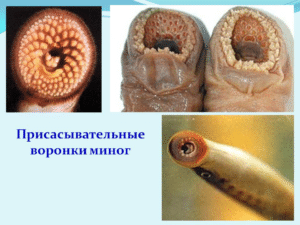 Now that we are talking about the fake spread about this insect, lets know some interesting facts about the insect. The insect is Giant Water Bug. Though comes under the category of ugly looking insects, it’s interesting to know about its life cycle and how it produces its young ones.

The insect is Giant Water Bug: 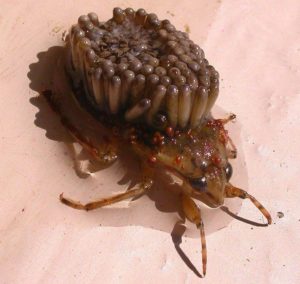 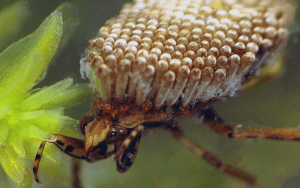 The water bug is unpleasant looking, especially when it’s carrying its eggs. Giant water bugs, known as belostomatidae, are also referred to as toe-biters and alligator ticks. These water bugs can grow to nearly five inches long, and are one of the largest beetles in the world. They can be found Worldwide.

They are usually found in freshwater streams and ponds. They are known to play dead, as they wait for their victim to come near. Then they strike, injecting a powerful digestive saliva with their rostrum, and suck out the liquified remains. Their bite is one of the most painful.

Giant water bugs are carnivores that hunt and feast on fish, crustaceans and amphibians. These giant bugs are known to chomp on unsuspecting humans. Many photos show male water bugs carrying their eggs upon their wings, which is why many consider these bugs pretty hands-on parents. Preferring their taste to their appearance, in some countries giant water bugs are considered a delicacy. Read more

Watch a male giant water bug carry a batch of eggs on his back:

Now after watching all the above links and videos, one can be sure that the post is created using  images and information from different sources that does not match at all. On social media such fakes are spread and are then circulated like fire. Please be careful before believing such posts.

These are fake because I can see makeup, I should think these people how made this up should go to prison for life because they scare little kids. THX