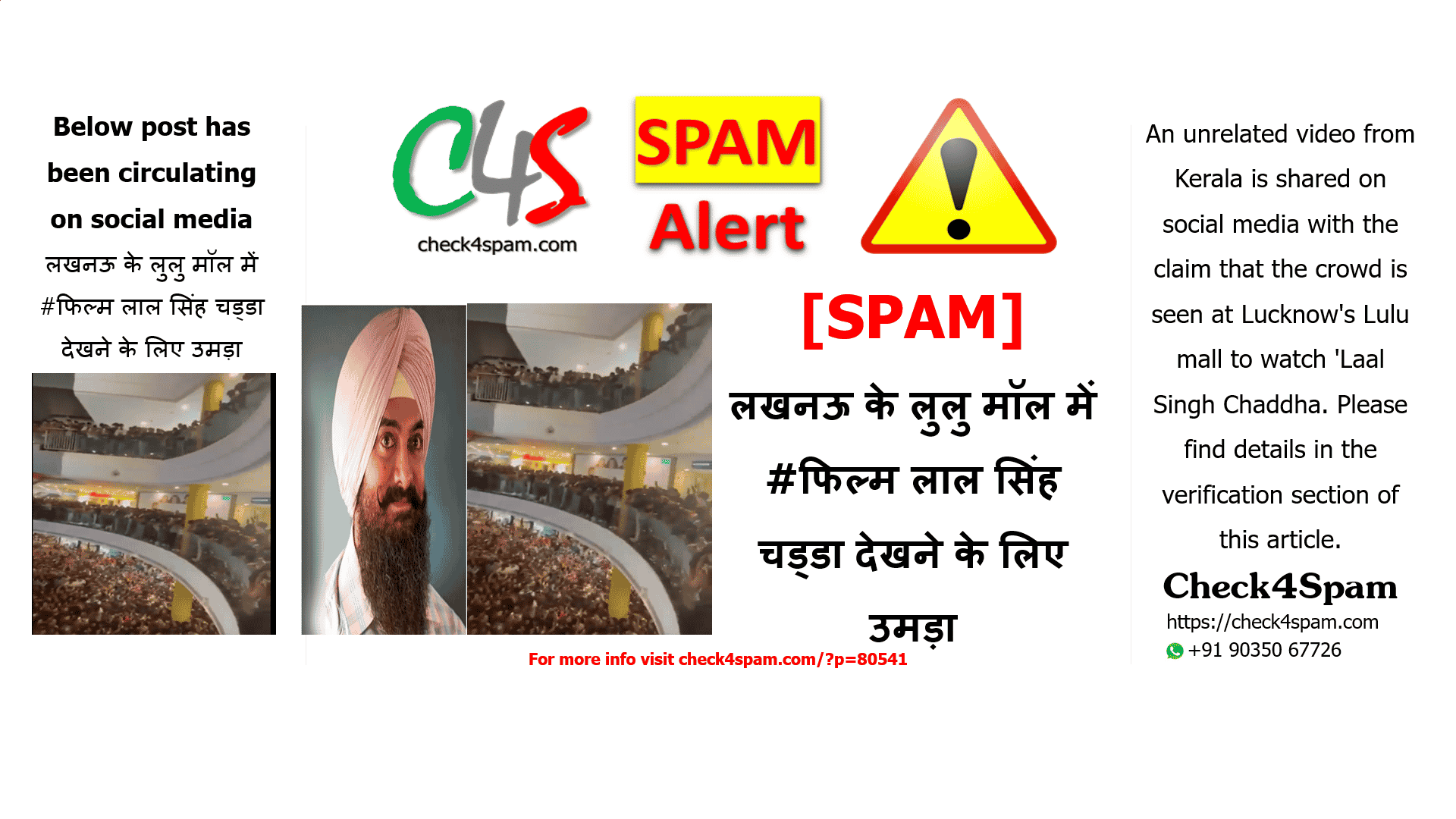 An unrelated video from Kerala is shared on social media with the claim that the crowd is seen at Lucknow’s Lulu mall to watch ‘Laal Singh Chaddha. Please read more about it in the verification section of this article.

Verification: Video from Kerala was shared as the crowd at Lucknow’s Lulu mall to watch ‘Laal Singh Chaddha’

While the film is released, an unrelated video from Kerala is shared on social media with the claim that the crowd is seen at Lucknow’s Lulu Mall to watch ‘Laal Singh Chaddha’. The claim given to the unrelated video is “लखनऊ के लुलु मॉल में #फिल्म लाल सिंह चड्डा देखने के लिए उमड़ा.”

In fact, the video shared with false claims is the footage captured at a promotional event for a Malayalam film “Thallumaala” in Kerala. The event took place at HILITE MALL Kozhikode on 10th August 2022 while “Laal Singh Chaddha” was released on 11th August 2022 in theatres. Check the links shared below to know the facts:

An article was shared in TOI with captions “‘Thallumaala’ team cancels promotions at Kozhikode, as fans swarm the venue.” The article reads”On Wednesday (Aug 10), the team had organized a promotional event at a popular shopping mall in Kozhikode, however, they had to cancel it, as Tovino Thomas turned into quite a crowd-puller (literally)! Fans swarmed the shopping mall to catch a glimpse of Tovino Thomas and the team of ‘Thallumaala’. As fans gathered in large numbers, the team of Thallumaala had to cancel the promotions.”

The video was shared on youtube on 10th August with the description “: When Tovino Thomas arrived as part of the promotion of Thallumala movie at Hilite Mall in Kozhikode.”

Another video was shared by Hindustan Times on 11th August 2022 with the description “Viral: Fan frenzy at Kerala mall gets film event canceled; Netizens shocked by ‘scary’ pics
118,793 views 11 Aug 2022 A massive crowd thronged a mall in Kerala to attend the promotional event of a movie. Many on social media pointed out that the situation could turn chaotic and dangerous in the event of an emergency. The fans came to attend a promotional event for Thallumaala, an upcoming Malayalam film directed by Khalid Rahman. Reports say the organizers canceled the event at the mall due to the huge turnout of fans, who came to see the actors of the film scheduled to visit HiLITE Mall in Kozhikode. In mobile videos, huge crowds could be seen standing on the elevators and crowding every inch of the mall. Watch this video for more.
#viral #india #kerala #kozhikode #mall #crowd #movie #promotion #hilitemall #fans #thallumaala #trending #trend.”

AB George (Distribution Partner in Malabar/North Kerala area) tweeted about the cancelation of the event due to an uncontrollable crowd.

#Thallumaala promotion event Crowd from #HiLite mall Kozhikode 😳🔥
The event which was scheduled for yesterday cancelled due to the uncontrollable crowd!! #TovinoThomaspic.twitter.com/YdHGD4RS5O