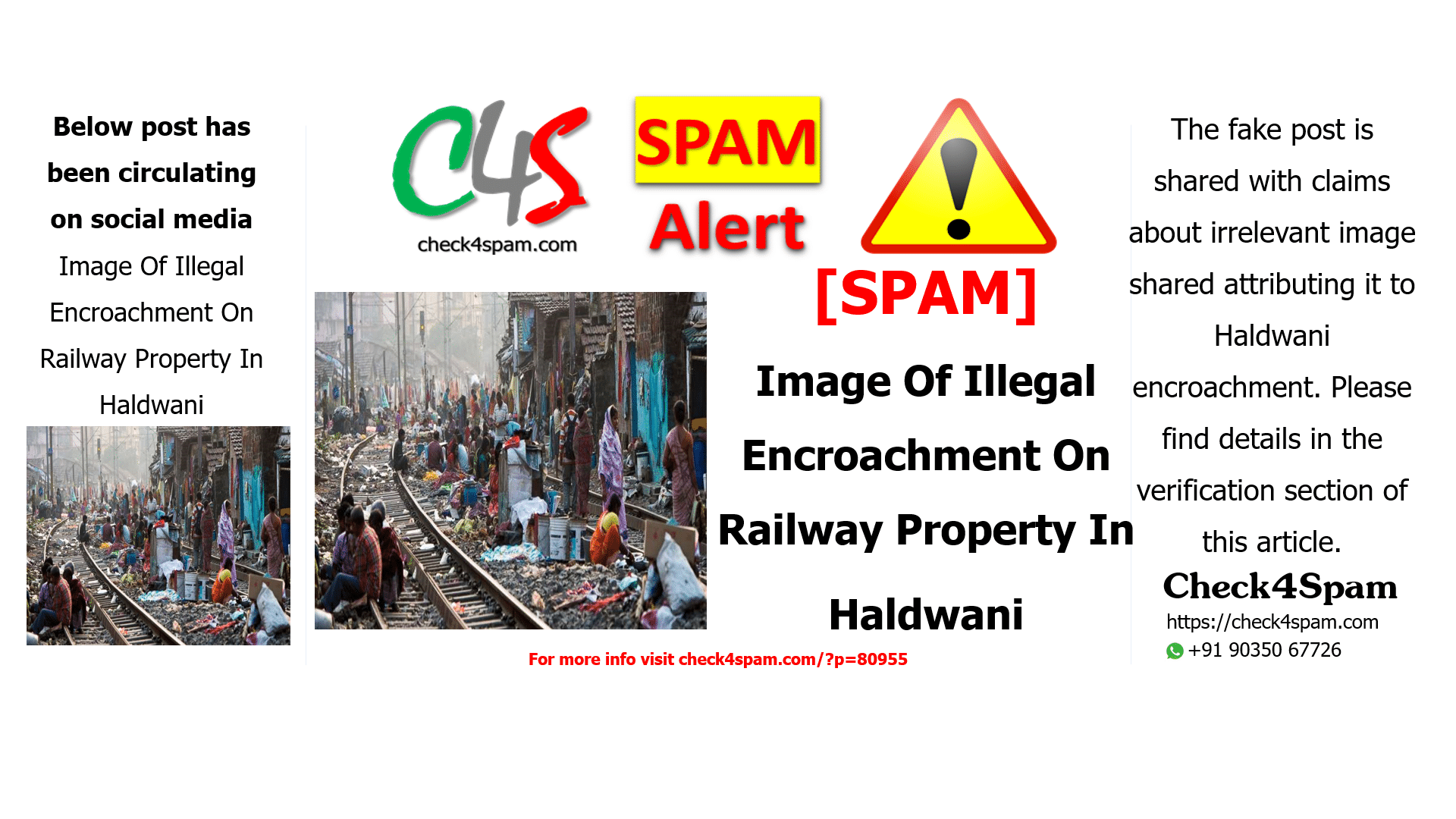 [SPAM] Image Of Illegal Encroachment On Railway Property In Haldwani

Image Of Illegal Encroachment On Railway Property In Haldwani

Dear Friends,
Don’t buy land anywhere .. just unite with your community in large numbers and capture any Govt/Defence/Railway land ; Milord will legitimise it.
And If you raise your voice against this, you are endangering country’s secularism.#HaldwaniEncroachment pic.twitter.com/kmNJrlgqa0

Verification: The image of a slum around the railway track is old and is from Kolkata

An image from Kolkata is being shared from Haldwani. The image is shared by a well-known BJP member on Twitter with the hashtag HaldwaniEncroachment. The image shared is not from Haldwani. Check the links shared below to know the facts:

An article with the caption “Richest 62 People Control Same Wealth as Poorest Half of World’s Population, Report States” can be read on ABC News was published on 18 January 2016. The viral image can be seen in the article. It states “People get on with their lives in a slum on the railway tracks as a commuter train goes past on Dec. 12, 2013, in Kolkata, India.” So the image is from Kolkata.

In fact, The Uttarakhand High Court ordered the residents of Haldwani to evacuate the area with the claim that the land belonged to the Indian Railways. This instigated heavy protests in Haldwani. After this, the Supreme Court ordered to halt of the demolition drive in Haldwani and asked the government to devise a ‘practical solution’ to the problem providing relief to the protest. Amidst the protest, the irrelevant image from Kolkata was shared from Haldwani. Read more here.

The image is also seen on Getty’s website which states, “The Slums And Homeless Of Kolkata, KOLKATA, INDIA – DECEMBER 12: People get on with their lives in a slum on the railway tracks as a commuter train goes past on December 12, 2013, in Kolkata, India. Almost one-third of the Kolkata population live in slums and a further 70,000 are homeless.” The image was captured by a photographer named Samir Hussein on 12 December 2013. In the description, it clearly states that the viral image is from Kolkata and not Haldwani.

The image shared is not from the Haldwani encroachment.

Image Of Illegal Encroachment On Railway Property In HaldwaniI Nokiye