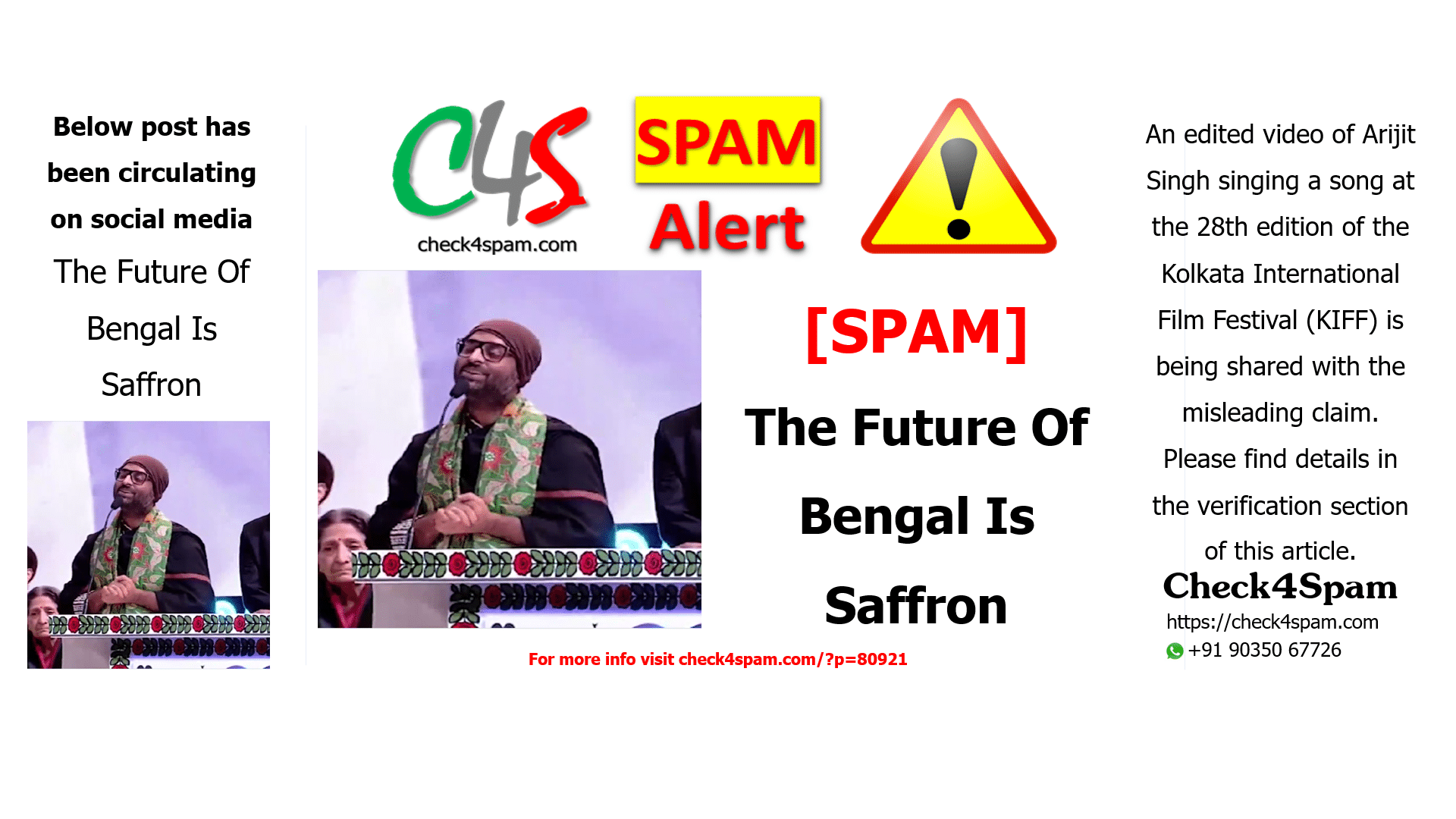 [SPAM] The Future Of Bengal Is Saffron

The Future Of Bengal Is Saffron

At the Kolkata Film Festival, Mamata Banerjee asked Arijit Singh to sing one of his favourites and he chose रंग दे तू मोहे गेरुआ…

It was an evening of realisations. From Mr Bachchan to Arijit, who reminded Mamata Banerjee, in her backyard, that the future of Bengal is saffron… pic.twitter.com/57n2RztC8B

Verification: Edited video is falsely shared to convey the future of West Bengal

A video showing Bollywood singer Arijit Singh singing the song ‘Gerua’ from the Hindi film ‘Dilwale’ starring Shah Rukh Khan and Kajol Devgan during the Kolkata International Film Festival (KIFF) on 15 December is widely circulating on social media. In fact, the viral video is altered. Arijit Singh was among the dignitaries present at the dais. Arijit hails from Bengal.

The caption shared along with this video states, “At the Kolkata Film Festival, Mamata Banerjee asked Arijit Singh to sing one of his favorites and he chose रंगदेतूमोहेगेरुआ… It was an evening of realizations. From Mr. Bachchan to Arijit, who reminded Mamata Banerjee, in her backyard, that the future of Bengal is saffron.”

Arijit Singh did not the song ‘Gerua’ to send a political message to the CM of West Bengal. The viral video is edited. Originally, Arijit Singh sang a Bengali song ‘BojhenaSheyBojhena’ followed by ‘Gerua’ as a tribute to Shah Rukh Khan. Check the live recording shared by Mamta Banerjee on her Facebook account. People shared a clipped and edited video to push the narrative that Singh sang the song ‘Gerua’ which had a political message for Mamata Banerjee.

Check the Kolkata International Film Festival’s (KIFF) live stream shared on its official website. We can listen to Arijit’s speech and Bengali song “Bojhena sheyBhojena” on request and then Gerua in the video shared below. The song was not at all for any political agenda.

An edited video of Arijit Singh singing a song at the 28th edition of the Kolkata International Film Festival (KIFF) is being shared with the misleading claim.

While we ensure to make you aware of facts, we share some interesting songs sung by Arijit Singh. How can we miss this?

Future Of Bengal Is Saffron I Nokiye